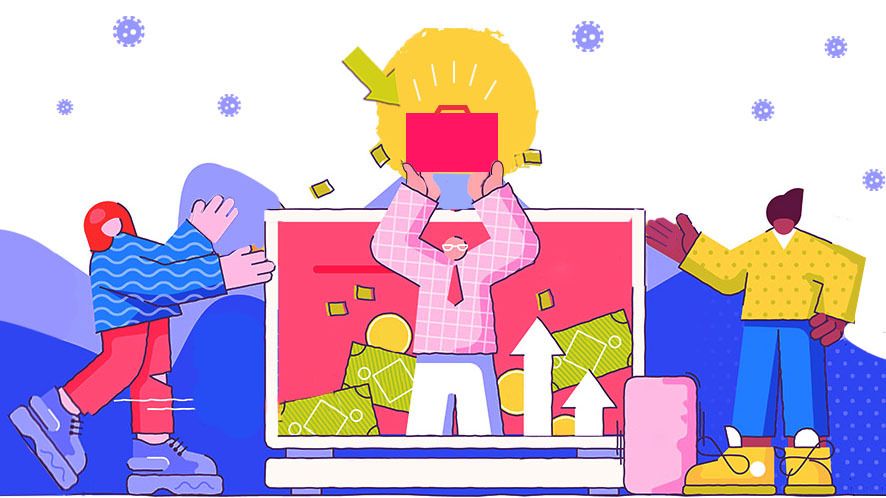 For starters, the Finance Minister reiterated that people will continue to receive free food grains up to November 2021. That’s 5 kgs per person per month for the next 5 months beyond what they’re already entitled to— under the food security law.

Then, we had the government extend the Atmanirbhar Bharat Rozgar Yojana until March 2022. What’s that, you ask? Well, it’s kind of a long story. But I am pretty sure you’re aware that your employer is expected to contribute towards your provident fund if you’re formally employed right?

So during the first wave, we had mass layoffs and the government was trying to incentivize companies to hire new people. But incentives have to be meaningful and the government decided that the best way to achieve this objective was to simply tell companies that they’d contribute towards the fund (for 2 years) if certain conditions were met. This meant employers no longer had to spend money investing in your PF and instead could use this money elsewhere. It offered them more legroom to hire new employees. And in a bid to keep incentivizing them to tread the same path, the government wants to extend this scheme and companies can now sign up for the benefits until March 2022.

Also, we saw the government introduce credit guarantees — a move that will likely benefit MSMEs, the tourism industry, and the healthcare sector.

But let’s start with MSMEs first.

Micro, Small, and Medium Enterprises (MSMEs) haven’t been doing all that well over the past decade. And just when you thought things couldn’t get worse, Covid made landfall and crippled them entirely. They’re not going to make it if they don’t get monetary support. However, banks have been reluctant to lend to these people since they’re likely going to default on their obligations. So the government had to assuage these fears and they’re doing this by providing credit guarantees — basically telling banks that the state would repay the loans in full if the MSME were to default. They are also extending the scope of the emergency credit line guarantee scheme — a fancy way of saying that they will now enable MSMEs to borrow collateral-free loans of up to 4.5 lakh crores as opposed to 3 lakh crores earlier.

But that’s not it. They’re doing the same thing with the tourism industry as well. Tourist guides looking to restart work will have the ability to borrow up to 1 lakh and agencies will have the capacity to borrow up to 10 lakhs. The government will be backing these loans and they’re hoping this will help people get back on their feet. Alongside these measures, the government also hopes to provide free visas to 5 lakh tourists who may intend to visit the country as we begin to open up. Good stuff all in all.

Finally, we have the healthcare sector — where we’ve already seen both public sector and private sector facilities rise up to the challenge these past few months. The government plans to spend an extra ~23,000 crores on upgrading public healthcare infrastructure. And provide guarantees on loans extended to private healthcare institutions looking to invest and expand outside metros.

Then we had some news on the PLI front — Production Linked Incentives. If you don’t know what that is, here’s a quick breakdown.

We ship most electronic products from outside India. And it’s worked to our advantage. We now have affordable phones, feature-packed television sets, and sophisticated computers thanks to our liberal approach to trade. However, this dependency isn’t always a good thing. It also has the capacity to hurt us in the long run, especially when you consider the fact that we import most of this stuff from China. So the government has been trying to bridge this gap between demand and supply. They’ve been trying to incentivize domestic manufacturers to pick up the mantle and produce certain electronic components in-house.

And to this end, they’ve introduced the PLI scheme.

If you’re an electronic component producer entitled to claim benefits under the PLI scheme all you have to do is produce more electronic items than you did last year and claim financial incentives on the incremental sales. However, considering Covid, not a lot of people managed to scale production and nobody was entitled to these monetary incentives. So the government has been sympathetic to their plight and they’re now granting an additional year to meet production targets and claim benefits afterwards.

Finally, there was also some support extended to the export sector, some money set aside to reform power distribution companies, and extra subsidies for farmers buying fertilizers. Put together, this was a pretty decent attempt at kickstarting growth in a fragile economy and hopefully, this is the first of many stimulus packages to come.

Finshots The Biggest Landlord of them all A few days ago, a brilliant thread on Twitter outlined how big financial institutions in the US may now be cornering the US housing market. So we thought we

Why telcos want a floor price?

Finshots Why telcos want a floor price? In today's Finshots we talk about why the idea of "floor price" is gaining traction once again Business The Story Shares of Vodafone Idea Ltd (VI)

Finshots Dealing with e-waste In today's Finshots we talk about e-waste and how you could potentially deal with this problem Policy The Story Electronic waste is piling up. Old phones, cameras, TVs

Chicken prices to the moon

Colleges Are Giving Students up to $25,000 Just for Getting Vaccinated

Campuses are using creativity (and money) to encourage COVID-19 vaccinations among young people. July 28, 2021 COVID-19 Colleges Are Giving Students up to $25000 Just for Getting Vaccinated Campuses

Bloomberg Federal Reserve officials signaled they are moving closer to when they can start cutting massive support for the US economy, but Chair Jerome Powell said there was still some way to go. “We

Facebook vs privacy | McDonald's fills up | TOGETHER WITH Hi Reader, here's what you need to know for July 29th in 3:05 minutes. 🔋 What? Your city is evolving! Congratulations, your city

🚀 Announcing our new job board!

FTT Update: And Robinhood Will IPO At...

​ ​ Hi all, Julie here. Sitting here on the edge of my seat waiting for this Robinhood IPO pricing to get announced. Tomorrow could get super interesting with the high retail allocation, but FTT Expert

Issue #104: Every time I pay an ATM fee I die a little inside

plus Gordon Ramsay + Gen Z finance July 28, 2021 • Issue #104 Dollar Scholar Dollar Scholar Hi y'all — When I was in college, I frequented a pizza joint called Satchel's. In addition to

Finshots Is India getting its own digital currency? A few days back we began hearing whispers about a central bank digital currency (CBDC) and how the RBI is working on it as we speak. So in

Back-to-School Shopping Will Be More Expensive This Year